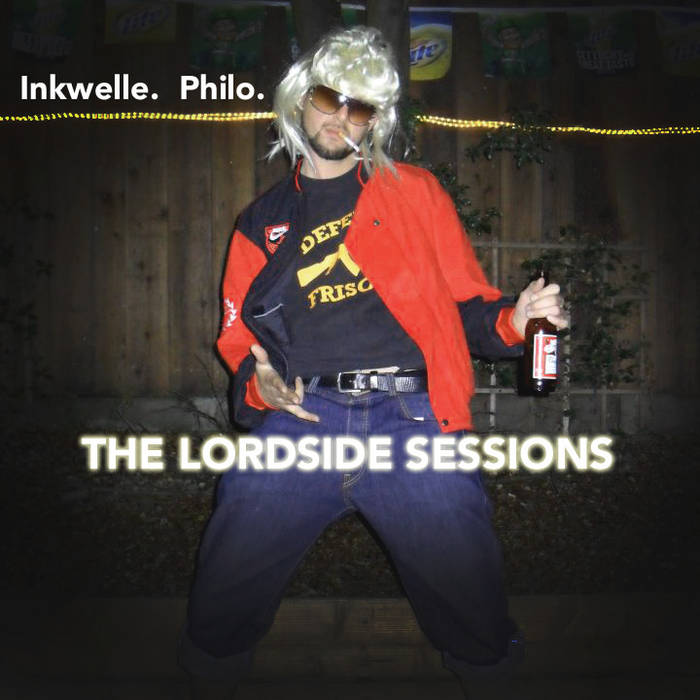 So this album has no release date, because it was technically never released... & to be honest, in the midst of the drug addled state of consciousness we were in during the writing/recording of it, we're not entirely sure when it happened. But I'll let my homie Inkwelle tell it.
"Once upon a time, in a bar, Philo (of the Fist Family) and Inkwelle (who had a real human's name at that point) sat drunkenly compacting to record a rap album. The resulting 14 tracks, recorded over two years, between midnight and dawn, comprise The Lordside Sessions: in retrospect, a paen to mid-twenties blue-collar pizza crafts- and sales-manship, bike transportation, chemical dependancy, romantic foibles, petty crime, southern culture on the rent-shtick, and the general darkness and relative chaos of the time and place (Asheville, 2004-6, which ironically looks brighter and more orderly with each passing year). It is also a comprehensive mid-career showcase of the Fist Family crew, who taught Inkwelle how to rap (yeah I said it). The album was produced by Philo, along with Inkwelle, and a nascent Calamus Root Magician, who hid inside a tallboy of PBR, waiting to manifest." - Inkwelle
hog crawlin" features Gus Cutty. "seven variation on the fate of malice wicket" features Jay Eazy. "it’s just as if you didn’t hear it" features Al Blisterfist. "two hands" features Jay Eazy and Toby Choo. "appreciation day" features Ronnie Mac. "talkin bout women (obviously)" features Johnny and Dirty Frost. "bus tub buffet" features The Appalachian Yeti. "monopoly money" features Linus and Harvey Merkleson. "swiss cheese and bananas" features Smidi, Jay Eazy, Gus Cutty, TopR, and Al Blisterfist. "thirteen" features Al Blisterfist. Also, we were on a lot of shrooms when we made Just As If You Didn't Hear It.
This album is retroactively dedicated to Kenny Powell (last voice on track 6). RIP. (all you others, you too . . .)
P.S. Check out Inkwelle at www.calamusrootmagician.com

Philo Reitzel raps, makes beats, videos, and illustrations. He currently splits his time between southern Mexico & the woods outside of Asheville, NC. For a time he lived in The Tenderloin, San Francisco, pre-tech-bro boom, performing at such venues as Club 6, The Fillmore, and Elbo Room. He drops a new song & video each week for his Freestyle Friday series on IG/YouTube/fb. ... more